Hovers
The PUG-Z is a space vehicle in LEGO Worlds, and is the principal method of transportation between worlds. It is also a flying vehicle that can be earned through completing certain difficult challenges.

This single-person rocket is primarily orange, with yellow booster rockets, grey landing struts and a clear bubble covering the pilot's chair. The design evolves slightly as the game progresses, with new levels adding more pieces to the ship, such as booster engines and antennas.

A blue variant was released with the Classic Space DLC, but is very hard to acquire. Where the original PUG-Z is orange has been changed to blue, however, this PUG-Z does not replace the ship used for takeoffs and landings.

The PUG-Z's landing area is used as a central "checkpoint" on each world, enabling the Player to return to it immediately, just by clicking the "Return to Rocket" button

The PUG-Z design was influenced by the spaceship in the game Puggsy. Puggsy is a 1993 puzzle-platform video game developed by Traveller's Tales and released by Psygnosis on Mega Drive and Mega-CD consoles, and on the Amiga home computer. Puggsy is the name of the title character, an orange space hopper-like alien who landed his spaceship on The Planet, intending to return home until his spaceship was stolen by the raccoon natives of the planet.

The wreck of the PUG-Z 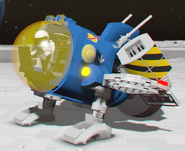 The PUG-Z, but in blue!
Community content is available under CC-BY-SA unless otherwise noted.
Advertisement